Why Can’t the Market Breakout?

Why Can’t the Market Breakout?

A lot of commentators on the stock market and financial advisors have pointed to a lot of different factors to explain why the market has been so flat this year. The factors include earnings and valuations, growth rates, fed expectations, international risk, and so on. And there is some truth in all these arguments. I’d like to point out a factor that I’ve not seen anyone discuss. It’s a technical analysis factor that has been in the making for over 15 years. What I’m talking about is a long term Fibonacci extension. For those that aren’t familiar with Fibonacci, it is a series of numbers and ratios that frequently occur throughout nature, and in the stock market as well. Part of the reason why this analysis works is due to the effect of self-fulfilling prophecy, that is, there are so many people watching Fibonacci lines that their pervasiveness makes them relevant. Fibonacci analysis can be used for retracements (predicting where a pullback will find support) as well as extensions (predicting where an uptrend will run into resistance). To do a Fibonacci extension, what I like to do is establish the bottom line on an obvious low point. After that, I pull the top line upward above the current market price until the 3 middle lines suddenly line up with a lot of previous highs and lows. Look at this example: 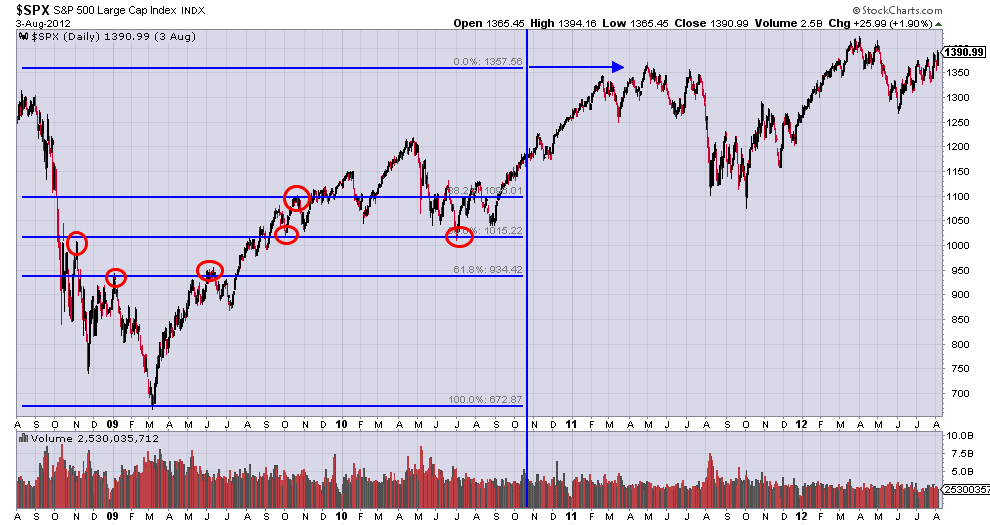 By establishing the bottom line on the 2009 low and then pulling up the top line until the middle lines suddenly touch several highs and lows, a person could have predicted that the S&P would likely run into resistance at 1,350 as early as Fall 2010. The next chart I’m about to show you is the granddaddy of all Fibonacci extensions. 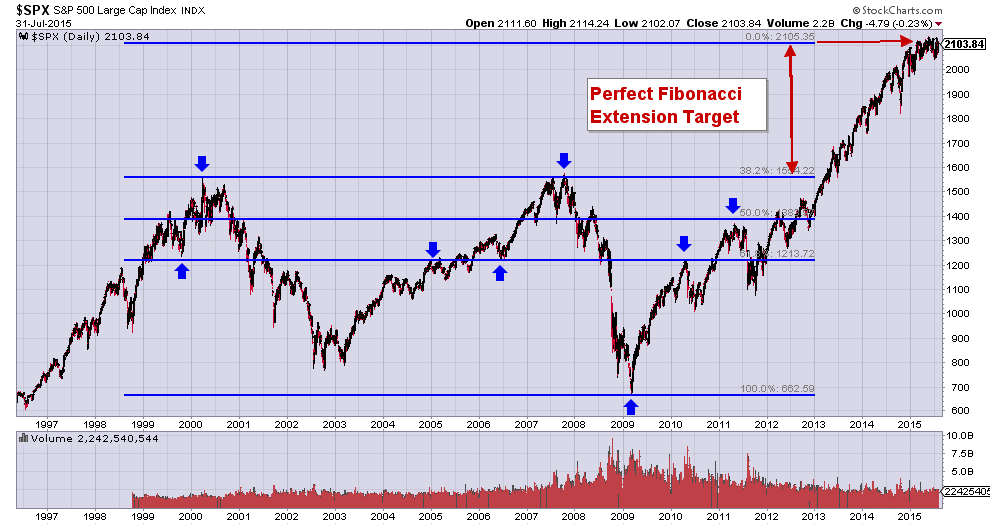 This extension incorporates both major highs from 2000 and 2007, and the low of 2009. It is over 15 years in the making and has a lot of other significant highs and lows that line up with the middle line to confirm its significance. Given the size and scope of this extension, it only makes sense that the market should run into major resistance here. That doesn’t mean it won’t break out eventually, but it does help explain why the trading range the market has been stuck in so far this year has been so stubborn.

About the Author: Derek Schmidly